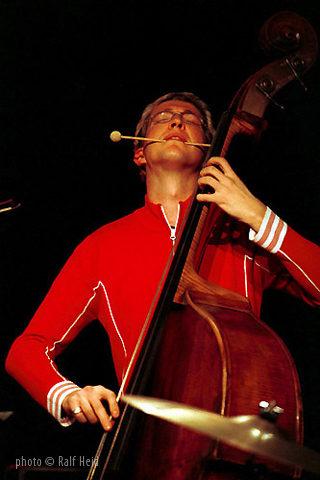 He studied double bass and music in the Netherlands (conservatories of Hilversum and Amsterdam), where he quickly entered the Dutch jazz- and subsequently the international scene of free improvisation.

In 2002 he receives one of the most prestigious Dutch music awards: the ‚Jur Naessens Music Award‘ for the project ‚New Anatomy‘, realized with his band ‚Dalgoo‘ and inspired by the work of the Russian writer Daniil Kharms.

His compositional work has been supported between 2001-2011 by the Dutch ‚Fonds voor de Scheppende Toonkunst‘ (today ‚Fonds Podiumkunsten‘) and in 2013 he recieved a grant from the Berlin senate to compose music for his Phosphoros Ensemble. In 2020, 2021 and 2022 he won solo stipendia from the Berlin Senate and Musikfonds.

From 2007 to 2011 he organized the concert series ‚U-Ex(perimental)‘ devoted to free improvisation, in cooperation with flutist Mark Alban Lotz, the Centraal Museum and the SJU Jazz Podium in Utrecht (NL).

He currently leads the Meinrad Kneer Quintet, the Trio Baars / Kneer / Elgart, the Phosphoros Ensemble, and works as a co-leader in the groups Dalgoo, Rose/ Kneer/ Barrett and Sequoia.

During the last years he has been touring extensively in most countries of Western and Eastern Europe, the Middle East, Turkey, North Africa and Mexico.